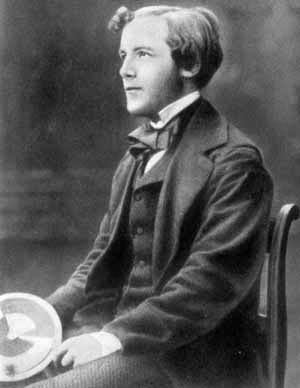 June 13 marks the the 178th anniversary of the birth of Scottish mathematician and theoretical physicist, James Clerk Maxwell, who famously devised a linked set of differential equations that, together, describe the behavior of electric and magnetic fields and their interactions with matter. Maxwell's mathematical knowledge was so rare that his equations were hardly understood in 1864, when he first presented them, and for many years thereafter.

The early years of great innovators like Maxwell are always of interest. Maxwell was born to a well-off family in Edinburgh, but soon after moved with his family to their 1500 acre estate in the outskirts.

Not surprisingly, even as a toddler Maxwell showed remarkable interest in things mechanical and was always inquiring how things worked. He loved verse and liked to memorize passages of verse. With his prodigous memory, by the time he was 8 years he could recite all 176 verses of the 119th Psalm. He also loved geometry.

Maxwell was an only child who was educated at home until the age of ten, when he was sent to Edinburgh Academy, where his schoolmates poked fun at his home-made clothes and shoes and country accent, nicknaming him "Daftie," meaning silly, stupid, and crazy. He didn't seem to mind. Off on his own, Maxwell spent his free time satisfying his love of verse and poetry by reading the lyrics of old ballads; he exercised his mechanical ability constructing models; and he experimented with his budding love of mathematics by drawing diagrams that his classmates couldn't understand. After some time, he found two schoolmates who would become his friends for life.

At first Maxwell was not much of a scholar, but around the age of 13, he moved close to the head of the class. At the age of 14, he wrote a mathematical paper in which he described a mechanical means of drawing mathematical curves with a piece of string, simplifying constructions that had been examined by Descartes in the 17th century. This paper was brought to the attention of the Royal Society of Edinburgh, whose members were the elite of Scotland's scientists and mathematicians. Maxwell was considered too young to read the paper to the society, so it was read for him by a professor from the University of Edinburgh.

At the age of 16, the young scholar was ready to move onto the University of Edinburgh, where he studied mathematics and logic under two eminent mathematicians and natural philosophy under an highly respected physicist. When he was 18, he published two papers in the Transactions of the Royal Society. One of these formed the basis for much of his future work. Again, he was thought too young to deliver the papers himself. To divert himself during his spare time, Maxwell studied the polarization of light; his experiments soon led him to discover photoelasticity, which in the 20th century was developed into an important tool for determining critical stress points in a material.

At 19, Maxwell moved to Cambridge, where he studied at Trinity College. At Trinity, he was well liked and his facile intelligence was well respected. He was invited to join the elite secret society known as the Cambridge Apostles, an intellectual discussion group that met once a week. While earning his degree in mathematics, he accomplished much of his work on his electromagnetism equations. He scored second in his final examination, but tied for first in the even more difficult examination for the annual Smith's Prize, awarded to Cambridge research students in theoretical physics, mathematics, and applied mathematics. Having earned his Bachelor's degree, Maxwell stayed at Trinity as a research fellow, free to pursue his own research.
Posted by PV Scientific Instruments at 5:53 PM