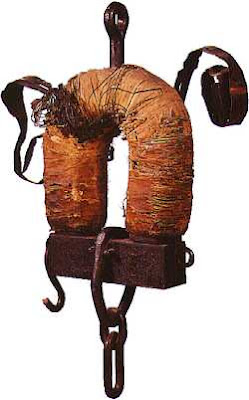 Here at PV Scientific Instruments we are always conducting research, and lately we've been focusing on the work of the revered American investigator of electromagnetism, Joseph Henry.

After a childhood and adolescence of poverty, in which he was orphaned, worked at a general store, and was apprenticed to a watchmaker and silversmith in Albany, New York, some well-to-do friends sponsored Henry's studies at the Albany Academy, which he began at the age of 22, with the intention of learning about science and medicine.

To pay for his upkeep, he took jobs as country schoolmaster, tutor to sons of the wealthy, and road surveyor. Finally, he earned a position at the Academy of Professor of Mathematics and Natural Philosophy, which allowed him to conduct his own research.
That's when he undertook to improve on English natural philosopher William Sturgeon's first simple electromagnets. Sturgeon used loosely coiled, uninsulated windings, but Henry wound the coils around the cores tightly, and insulated the wires, reputedly with strips of silk torn from his wife's petticoats.
In 1831, Henry reported on his experiments and magnet-winding principle in the American Journal of Science, published at Yale College.
Soon Henry built a magnet for Yale, which was eight times more powerful than any electromagnet constructed in Europe. Shown here, the Yale magnet had a core of 59 1/2 pounds and could hold 2,063 pounds of iron.
Henry used his magnets for serious study of strong magnetic fields; he discovered mutual induction and self-induction. His discoveries made during experiments with windings made the telegraph possible.
In 1846, at the age of 49, Henry set aside his experimentation to head the newly instituted Smithsonian Institution in Washington, DC. In 1867, he took on the presidency of the infant National Academy of Sciences. Henry passed away in 1878, having made discoveries based on meticulous research that would transform industry and communications forever. 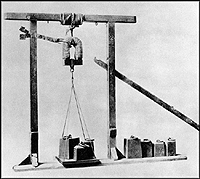