Musschenbroek and the First Electrical Capacitor

"I wish to inform you of a new, but terrible experiment, which I advise you on no account personally to attempt."
~Pieter van Musschenbroek


March 14th, 2011, marks the 319th anniversary of the birth of Pieter van Musschenbroek, the fellow usually credited with the discovery and initial investigation of the world's first electrical capacitor.


Called the Leyden jar after Holland's University of Leyden where Musschenbroek taught, this instrument was independently discovered at about the same time by Ewald Jurgen von Kleist, a Pomeranian cleric.

Musschenbroek, the son of a scientific instrument maker, was a medical doctor, mathematician, and natural philosopher who spoke at least seven languages and had attended lectures by Isaac Newton and Newton's experimental assistant, John Theophilus Desaguliers, himself famous for his discoveries regarding the properties of electricity.
Before the discovery of the Leyden jar, electrical experimenters were able to generate electricity using early static generating machines, but they were limited in their experimentation because they had no way to store the electricity thus generated. In 1746, Musschenbroek, working with collaborators, was attempting to electrify water when he got the shock of his life, quite literally:

Musschenbroek described his experience in a 1746 letter:


"I wish to inform you of a new, but terrible experiment, which I advise you on no account personally to attempt. I am engaged in a research to determine the strength of electricity. With this object I had suspended by two blue silk threads, a gun barrel, which received electricity by communication from a glass globe which was turned rapidly on its axis by one operator, while another pressed his hands against it. From the opposite end of the gun barrel hung a brass wire, the end of which entered a glass jar, which was partly full of water. This jar I held in my right hand, while with my left I attempted to draw sparks from the gun barrel. Suddenly I received in my right hand a shock of such violence that my whole body was shaken as by a lightning stroke. The vessel, although of glass, was not broken, nor was the hand displaced by commotion: but the arm and body were affected in a manner more terrible than I can express. In a word, I believed that I was done for."


Metal and water conduct electricity, but glass does not. When Musschenbroek's assistant rubbed the rotating glass sphere, a positive static charge was generated. As this positive charge traveled up the chain, across the gun barrel, and down the brass wire into the water, it didn't electrify the water quite as Musschenbroek had hoped. Instead, the static charge continued to travel through the water and built up on the inside surface of the glass jar.


Simultaneously, a negative static charge was being induced on the outside surface of the glass jar in Musschenbroek's right hand, with his body providing a path to ground.


These opposite static charges were held in equilibrium on opposite sides of the non-conducting glass until, Zap!, Musschenbroek completed the circuit with his own body by touching with his left hand the inside of the glass jar held in his right hand. The result was violent discharge of stored static electricity, much like a lightning bolt. 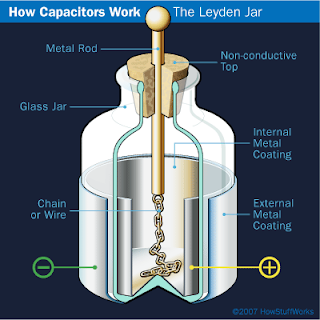 Soon after, a London experimenter named Dr. John Bevis replaced the two conductors on either side of the glass (the water inside the jar and Musschenbroek's right hand resting on the outside of the jar) with metal sheets wrapped inside and outside of the jar. A cap was added to the jar to secure a metal rod and chain suspended in the jar. In this configuration, the opposite charges on the inside and outside of the glass jar hold each other in equilibrium until a path is provided for their discharge.
The Leyden jar made it possible for early experimenters to conduct a wide range of electrical experiments.


One experimenter who made excellent use of the Leyden jar was Benjamin Franklin, who was the first to understand and explain how the Leyden jar functions. Franklin based his understanding one of his most important scientific observations—that electrical energy has both positive and negative charges.